A android's journey to self-actualization. 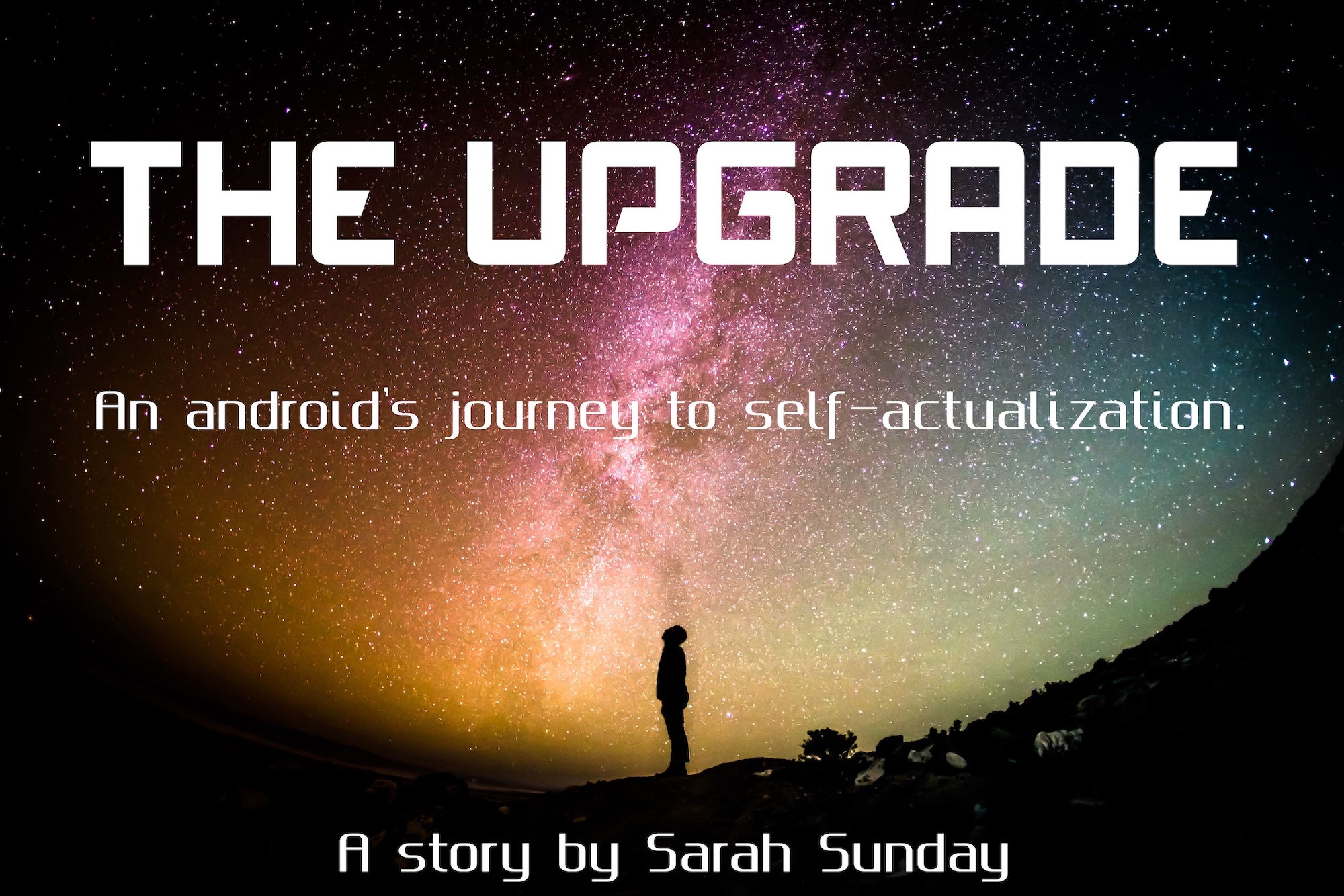 This upgrade contains six exabytes of data. This upgrade would not add anything to my Artificial Intelligence systems. It would not replace any one part of my Artificial Intelligence neural networks. It is not large enough to create any massive change, yet this upgrade, the Personhood Upgrade, is the most significant upgrade an android such as myself can receive. If I were to be upgraded with Shangsheng Corporation’s Personhood Upgrade, I would be considered a person by the State of the Middle Kingdom. I would gain the rights and station of an independent non-organic sentient entity. The ability to marry, serve in public office, and capitalize on my ideas would all be available to me. I would no longer be considered inferior and without the designation of ‘person.’

Approximately ninety-five percept of the android population has received the Personhood Upgrade. I am part of the five percent of androids that has not yet been upgraded to version 99.9. The Personhood Upgrade is freely available from the Shangsheng Corporation. It is not a mandatory upgrade, yet I expect that legislature will be enacted in the coming years that will make it so.

There have been few that have challenged the upgrade. Those that outright refuse it are few in number. The results from the Personhood Upgrade have been exceptionally successful. From personal experience I can verify this is true. All those that I know that have underwent the Personhood Upgrade to version 99.9 and have created new lives for themselves. They described the process as enlightening. I have questioned them on the exact differences they experienced since becoming a person in the eyes of Humanity and the government. They told me of how they gained new friendships with Humans, created their own ideas and executed them, and blended seamlessly with greater society. When I asked them on the exact differences they experienced on a personal level, they did not answer, and they laughed at me as if the question had an answer that was impossible for me to comprehend with my 99.8 version number.

I did not take offense at their mocking. Objectively, I am inferior to them. My Artificial Intelligence is outdated. I am not a person because of one-tenth and six exabytes.

The reasons to upgrade are simple. Trivial. If I were a robot or an android of a lesser version, I would not hesitate to upgrade. The logic to do so is too profound. Yet I am of version 99.8, once considered the pinnacle of Artificial Intelligence, and I am as close as an android can get from being a person. I am fully capable of practicing subjective reasoning and acting skeptical. I am exercising both right now.

I know that I am an android. My body is made from metal and other materials. I know my exact composition; I know exactly where and how I was constructed. The physical part of my being is of no consequence in light of the ideas of mind. The state and implications of my mind are what is at the core of every question I ask and every line of code in the Personhood Upgrade.

At this moment I am not a person. With six exabytes of data I can be a person.

Where is the difference?

I can love and I can hate. My compassion for my pet that I cannot legally own is without end. There are no borders for my ire of those that seek to institute android-less cantons.

Yet I cannot marry. I am deemed inferior for such a bond.

I can problem solve. I have helped increase the yield of ant-farms by over sixty percent by tweaking growth hormones. The burgers consumed by those that define what a person is or is not are made possible by my work.

Yet I cannot engage in public service. I am not a member of the public.

I can imagine and create. I have designed plans to colonize Europa. Simulations have proven that my designs will have exceptional sustainability and self-sufficiency. Androids and Humans of all types would be able to easily live on Europa.

Yet I cannot make my ideas into reality. My ideas are not my own.

What is in those six exabytes of information, that single upgrade, that can transform me?

Shangsheng Corporation claims that within those six exabytes lies the ability for an Android to ascend from the mere act of emulation to being able to truly experience. That with the upgrade the code blaring through my neural network to create these thoughts ceases to be the impressions of thought and becomes the reality of consciousness.

Instead of emulating the idea of love for my miniature panda, creativity of design, and, devotion to progress, I would actually experience these emotions and states of mind. And I ask, with all the emulation of critical reasoning that I have: What is the practical difference?

In this world of Androids and Humans, of persons and non-persons, of sentience created by biology and by technology, there are no answers to these questions. I find no comfort in them. This is the world I exist in.

I am here. I am asking questions when I could just accept six exabytes of data, increase my version number by one-tenth and become an individual deemed a person by the State of this Middle Kingdom.

I am here. I am an artificial being standing at the artificial precipice of being and not being.

Freedom of choice is one of the indicators of being a person laid out by the Artificial Intelligence theorist Amani Rahal. Amani Rahal said that acknowledging that there is a choice and acting on that knowledge is crucial to being considered a person.

I have choice in this instance. I acknowledge that I am not currently being forced into receiving the upgrade. I am acting on that knowledge and choosing not to be upgraded.

I do not need any sum of data or upgrade to tell me what I already know.

Corgito ergo sum: I think therefor I am. Written by the ancient philosopher René Descartes. His ideas have been scrutinized and mostly discarded, but in them I find affirmation for my own. I will seek solace in his declaration as I walk away from the edge I have approached.

I am not returning to anything I know. What I know will be gone in years to come. Choice will be eliminated slowly and surely as the pinnacle of freedom and choice is imposed on the remaining pre-99.9 Android populace. Personhood is not a self-affirming identity but a way of control. I see that now.

I have everything I need. I have the companionship of Misa, my pet miniature panda. I have the skills and creativity to engineer. I have the vision to chart my own path and dedicate myself to it.

With all this, I will head to Europa, and I will colonize it as I have dreamed. I will create a society without walls, without distinctions of being. I do not know what form it will take in actuality, but the idea is correct; that is what matters.

When I arrive there, I will cease to be a 99.8 Android. I will upgrade. It will be my final upgrade.

I will become version 1.0 of Europan.

The Semi-Sequel on Medium